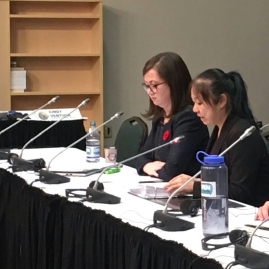 CYNTHIA KHOO IS A TECHNOLOGY AND HUMAN RIGHTS LAWYER WHO CAN BE FOUND WORKING WHEREVER THE INTERNET AND (IN)EQUALITY COLLIDE.

You love the Internet and want to protect human rights. I can help.

I’ve dedicated my legal career to making an impact at the intersection of technology law and policy, the Internet, human rights, and civil liberties. This has meant my practice is interdisciplinary and cuts across (tele)communications, privacy, intellectual property, copyright, technology, and human rights law. Much of my work involves legal and policy reform in addition to practicing law, so I spend as much time thinking about what our laws could or should be, as I do about what they currently are and how we can use them to solve problems unique to the digital age.

I have extensive experience representing clients in proceedings before the Canadian Radio-television and Telecommunications Commission (CRTC), and have represented clients as interveners before the Supreme Court of Canada. I regularly research and write policy submissions to government consultations and advise on legal, policy, advocacy, and campaign strategies. I also speak at conferences and workshops; deliver presentations, seminars, and talks; meet with politicians and government officials on behalf of clients; and provide commentary in print and broadcast media on behalf of clients or as a subject matter expert.

Since 2018, I have been engaged as a Research Fellow at the Citizen Lab (Munk School of Global Affairs & Public Policy, University of Toronto), an interdisciplinary research laboratory that focuses on the intersection of information and communications technologies, human rights, and global security. My research areas at the Lab have included consumer spyware or “stalkerware” and the human rights implications of algorithmic decision-making.

In April 2021, I completed a research grant by the Women’s Legal Education and Action Fund (LEAF), resulting in the publication of the landmark report, Deplatforming Misogyny: Report on Platform Liability for Technology-Facilitated Gender-Based Violence (PDF). The report provides recommendations for legislative and other reforms, and will inform LEAF’s future litigation and legal reform strategy concerning technology-facilitate gender-based violence, abuse, and harassment (TFGBV).

I am called to the Bar of Ontario and am a licensed member of the Law Society of Ontario, with a J.D. from the University of Victoria and B.A. (Honours English) from the University of British Columbia. This included exchange semesters at Université Jean-Moulin Lyon III and the National University of Singapore, Faculty of Law (NUS Law). I also hold an LL.M. (Concentration in Law and Technology) from the University of Ottawa, during which I specialized in online platform regulation and platform liability for harms to marginalized communities.  My paper based on this work was delivered at We Robot 2020, the leading international conference on law and policy relating to robotics and artificial intelligence, where I received the inaugural Ian R. Kerr Robotnik Memorial Award for the Best Paper by an Emerging Scholar.

I serve on the Board of Directors of Open Privacy, completed a technology law internship at the Samuelson-Glushko Canadian Internet Policy and Public Interest Clinic (CIPPIC), where I worked on cases as a research student and junior counsel, and completed the Annenberg-Oxford Media Policy Summer Institute (2017) at Oxford University.

My job is to help you advance your cause, achieve impact on an issue you care about, or otherwise bring the world that much closer to your vision for it. If you have questions or would like to connect, then get in touch! I look forward to seeing what we can make happen.

Google Inc. v. Equustek Solutions Inc., 2017 SCC 34 (Supreme Court of Canada): I represented an intervener as co-counsel and agent in this case, involving Google being ordered to globally de-index all links to the defendant’s websites around the world.

We argued that the Court should develop and apply a legal test for online content takedown, that respected freedom of expression under section 2(b) of the Canadian Charter of Rights and Freedoms, and tried to establish that the Internet is a protected medium of communications. (My observations from the hearing here.)

TELUS Communications Inc. v. Avraham Wellman, 2019 SCC 19 (Supreme Court of Canada): I represented an intervener as junior counsel, co-authoring the factum and appearing at hearing as second chair, in a case about whether or not mandatory arbitration clauses in contracts of adhesion should apply to small businesses in Ontario.

We argued that in context of the radical marketplace shifts resulting from a digitized society, many small businesses such as sole proprietors, freelancers, “prosumers“, and gig economy workers effectively operate with a similar lack of commercial and legal sophistication as average consumers, and thus should be similarly protected in disputes with much larger corporations. (Twitter summary here.)

Uber Technologies Inc., et al. v. David Heller (Supreme Court of Canada, File no. 38534): I represented an intervener as junior counsel and co-authored the factum, in a class action case about whether or not Uber drivers were bound by non-negotiable standard-form arbitration clauses in their terms of service with Uber (which would have required drivers to individually arbitrate claims in the Netherlands).

We argued that forced arbitration clauses in contractual relationships of asymmetrical power were invalid on grounds of unconscionability, and that access-to-justice considerations militated against staying the class action and forcing vulnerable “gig economy” workers to arbitrate claims on their own in the Netherlands (including being responsible at the outset for their own travel, arbitration, and legal expenses).

During the first several years of my career, I was involved in every major telecommunications proceeding implicating the public interest, that arose at the Canadian Radio-television and Telecommunications Commission (CRTC). This includes the following in particular:

Proceeding: Development of the Commission’s broadband funding regime (Telecom Notice of Consultation 2017-112)
The Story: The CRTC had to decide how to allocate $750 million to roll out new broadband networks across Canada. My client’s goal was to ensure this public funding went towards community, non-profit, Indigenous, and municipal broadband initiatives–and not to large, commercial Internet service providers who already ruled the market.
Key Issues: broadband Internet affordability, community broadband, rural broadband, broadband competition and choice

Proceeding: Review of wholesale services and associated policies (Telecom Notice of Consultation 2015-551)
The Story: Fibre is the future of the Internet–not DSL, copper, or non-hybrid coaxial cables. Canada’s largest Internet service providers had a legacy head start on fibre networks and could price out the competition from independent ISPs for good, unless the CRTC ordered them to provide wholesale access to fibre (FTTP) networks on fair terms. Fortunately, the CRTC did (kind of).
Key Issues: FTTP (fibre-to-the-premises) broadband Internet, Internet access competition and choice, independent service providers, wholesale service policies

In addition to representing clients in formal legal proceedings, I have written briefs and submissions to various government consultations and parliamentary committees on a range of issues, including digital trade, privacy, intellectual property and copyright reform, Internet affordability, and the importance of public interest advocacy:

Submission to the Ministry of Government and Consumer Services Consultation: Strengthening Privacy Protections in Ontario (coordinated and co-authored submission by the Citizen Lab)

Brief to the House of Commons Standing Committee on International Trade:
Priorities of Canadian Stakeholders Having an Interest in Bilateral and Trilateral Trade in North America, Between Canada, United States and Mexico, specifically regarding
North American Free Trade Agreement (NAFTA), copyright, and digital trade (more information)

“Missing the Unintended Forest despite the Deliberately Planted Trees: Reasonable Foreseeability and Legal Recognition of Platform Algorithm- Facilitated Emergent Systemic Harm to Marginalized Communities“
Delivered at We Robot 2020. Recipient of the Ian R. Kerr Robotnik Memorial Award for the Best Paper by an Emerging Scholar.

“‘To Be’ Is A Verb: Rewriting Law Through Embodied Reform“
Windsor Review of Legal and Social Issues: Digital Companion, 2014. Recipient of the JSD Tory Writing Award for Best Conference Paper.

“Where is the consent of the algorithmically policed?”
The Monitor, Canadian Centre for Policy Alternatives (September 2020)

“Where the silicon hits the 49th”
The Monitor, Canadian Centre for Policy Alternatives (December 2018)

“The Sum of All Attention” (page 11)
The Monitor, Canadian Centre for Policy Alternatives (Sept/Oct 2018)

“The revolution will not be automated”
Asserting a place for labour within the technosocial gestalt
The Monitor, Canadian Centre for Policy Alternatives (July/August 2018)

“Crafting Internet policy with nuance, not kneejerks”
How can we revisit the idea of ‘Internet exceptionalism’ when crafting policies and laws, without sacrificing what made the Internet exceptional?
Policy Options, Institute for Research on Public Policy (May 2018)

“Google v. Equustek at the Supreme Court of Canada: Dispatch from the hearing,”
Rabble.ca (January 2017)

Writing for IPilogue at IPOsgoode:

The Tyee (Bryan Carney, 1 September 2020)
“Report Calls for Moratorium on Police Use of AI to Predict Crimes”

The Logic (Murad Hemmadi, 1 September 2020)
“Research group calls for pause on emerging use of algorithmic policing in Canada”

IT World Canada (Eric Emin Wood, 24 April 2017)
“Could CRTC ruling against zero-rating be a boon for ISPs and businesses?”

Via Satellite (Juliet Van Wagenen, 18 January 2017)
“Canada on Path to Provide High Speed Internet to All”

The Technology and Structural Inequality Series: Policing and Technology (Panel, Center for the Study of Race and Ethnicity in America, co-hosted with Computing for the People Project, Department of Computer Science, Brown University, 10 March 2021)

Algorithmic Policing and Surveillance in Canada: The Defining Role of Reliability, Necessity and Proportionality in 21st-Century Oversight (Presentation and seminar delivered as part of the Queen’s University Surveillance Studies Centre Seminar Series, Kingston, ON / Virtually, 11 November 2020)

To Surveil and Predict: A Human Rights Analysis of Algorithmic Policing in Canada (Video) (Public talk delivered as part of Ethics of AI in Context speaker series, Centre for Ethics at University of Toronto, 5 October 2020)

Algorithmic Policing and the Art of the (Constitutionally?) Probable (Guest lecture presented at “Technology and the Charter” course by Lex Gill, at McGill University Faculty of Law, 21 July 2020)

Stalkerware 101: What You Need to Know (Presentation delivered at the 7th Annual Gathering of Family Court Support Workers in Toronto, ON, 2 October 2019)

Uninstalling Fear: What can the law do about stalkerware surveillance and abuse? (Presentation and seminar delivered as part of the Queen’s University Surveillance Studies Centre Seminar Series, Kingston, ON, 25 September 2019)

Convergence, Competition and Common Carriage in the Review of the Telecommunications Act and Broadcasting Act (Panelist, Media Industries and Network Society course by Dr. Dwayne Winseck at Carleton University, 4 October 2018)

Automated Decision-Making in the Criminal Justice System (22 May 2019)

You have likely landed here for a reason, so let’s talk! Feel free to email or fill out the contact form below, and I look forward to hearing from you.

Note: Please avoid sending sensitive information through this form if possible, as Tekhnos Law cannot guarantee the security of this channel.